I had not sat down inside or outside a Fresno business for nine months. Until…

Yep. I broke down and went to the new (still improving) beer garden setup at Zack’s Brewing in Downtown Fresno.

I had a couple beers along with some tri-tip.

It’s looking good, the beer is still awesome, food was great and it all felt weird.

I sat outside and away from everyone. Wore a mask except to drink and eat. I felt safe enough.

But I didn’t have to go. I could have stayed home. This is what I have done this whole Pandemic: Getting takeout & delivery. No inside or even parking lot seating, for me.

But I broke, had some beers and got some flack for it on Facebook with a reminder of how things are going out there:

I can’t say disagree with the flack. But I wanted to support a friend’s business and have a Birthday Beer.

Zack’s and Tioga are making things as safe as possible and I was thirsty for an hour of normalcy.

We have all made our Corona choices somewhere. A tasty beverage on a nice Sunday afternoon broke me.

Now I gotta re-focus, a long Winter lies ahead.

Fresno’s Bitwise Industries has a virtual festival happening Saturday called No Place Like Home. It starts at 9 am and goes till 10 pm.

Go here to sign up. I “bought” three tickets. They’re free but you still need to sign up. If you want to go all the way with it, you can buy a box that has swag to maximize the festival experience.

I might be more interested in the box Tioga has put together for it with the new and exclusive Valley Sunrise:

How the hell is this gonna work?

I assume there will be a constant Main Stage channel to watch and maybe some Stage B and C action to look at if you feel like flipping back & forth, I don’t really know dude.

They are going to stream stuff to the Internets and we’ll watch, nuff said.

I plan on having it in on the background on a screen somewhere in the house, all day, with focused stops to watch some of the more interesting acts.

I’ll be looking out for the music acts for sure:

How the hell is there food availible for this?

Organizers have teamed with Fresno Street Eats to have festival vendor food sent to your safe place. Not real sure how all that will work, but I guess we’ll find out Saturday.

I hope I don’t run into any people I don’t want to talk to. Or end up kicking myself for not remembering their name, or die of lameness for making bad awkward comments to people, or get drunk and… oh wait, virtual, I almost forgot. I’ll only be embarrassing myself at my own house like I do every day. Neat.

I’m sure Fresnans will still complain about parking though. And not enough bathrooms, which, actually, I have a complaint about… oh dammit, VIRTUAL, *bangs forehead* Mike, virtual festival.

In fact, if Bitwise wants to make it feel like a real festival, it will start an hour late and fall further behind schedule as the day goes.

Seriously, props to Bitwise and everyone involved in putting it together. I’m actually slightly pumped to see this thing. And thanks for giving me something to drink beer to while staring at stuff.

I’ll leave you with some Sagey to pump you up. Please mosh at home responsibly.

You saw last week or more when Joe Rogan gushed about Chef Paul’s and called Fresno Sketchy, right? A bro in L.A. wanted to make sure we knew:

Fresnans did, in fact, ‘cancel Joe’ if getting upset is canceling. But Rogan did not respond to anything on Twitter or wherever else, because he is JOE FUCKING ROGAN! Why would he? And he’s a comedian MMA guy turned huge podcaster, who cares?

So there was nobody fighting, impossible for it to go viral. But who really totally knows why things go freaking viral!? It’s a bunch of little things, IMO.

Speaking of a bunch of little things turning into something…

Why did Fresno get so mad at Firestone Walker Brewing?

The Firestone Walker fight (the ‘Firestone Flap’ as I like to call it and nobody else cares enough to call it that and be nerdy like me, and that’s ok [sadness]) blew up so big, bigger than Joe Rogan’s brief backhanded compliment to a Fresno restaurant, because….

Hell, it’s bigger than White Claw and has been for years.

Any damn place in Fresno that might even THINK of having craft beer, has Firestone. Fresno and the 559 are almost forced to spend a lot of money on 805, Luponic Distortion 1 thru infinity, and whatever mixed-pack is taking up an end or a full island, at Save Mart.

I do not have the stats but I would guess that half the tanks in Paso are paid for with 559 money. We might even drink more Firestone Walker beer than people living in the 805.

Now, add to this, we have always suspected the Central Coast does not like us Central Valley folks. Every once in awhile there will be a racist or pretentious comment lobbed our way from the coast. Sometimes we ignore it sometimes we don’t.

So that’s just a LITTLE bit of our Paso Robles history.

Cut to a lazy Sunday morning in Fresno. Fresno Twitter is relaxing, fat and happy from a John Legend visit, and a subsequent positive Fresno Tweet, enjoying breakfast burritos & coffee, scrolling Twitter and the webs and such.

Someone responds to John Legend’s Tweet with a negative Fresno bash. Who cares, right!?!

Except, the person bashing Fresno works at Firestone Walker. The person lives in Paso (How is that better than being from Fresno?). And, most importantly, this person is the Communications Manager for Firestone Walker Brewing.

All this love and money Fresno gives and it turns out Paso Robles thinks we’re a shithole and is not even classy enough to NOT say it publicly.?!?

There. There’s a quickass review.

So, there are many areas of Fresno that are underserved, most certainly. Sometimes it feels like Fresno is only River Park, Downtown, Fig Garden Village, Tower, and Fashion Fair. If a place isn’t in one of those areas then it doesn’t exist. Small city ways.

NW Fresno has been begging for a place like Mad Duck, even if it didn’t know it. The new location is at the NE corner of Herndon & Marks (across from Taco Bell, behind the Starbucks and new Ampersand Ice Cream.

They picked a good spot.

It’s small, or at least feels small, in comparison to the Campus Point location. Before I saw it I was bummed that it was small. Small means more waiting for tables, in my eyes. While that may be true, I like the vibe the small gives. It feels more social and neighborhood than Campus Point.

The combination of the North West Fresno crowd and the Mad Duck brewpub atmosphere, if I could pick one band that could describe the vibe it would be Fleetwood Mac.

I can take or leave Fleetwood Mac but that feeling you get when you’re in a good mood, just starting to relax and forget life, you have a couple of beers in ya and the perfect part of a song comes on and you’re like “Yeah, man, this.” That is Mad Duck NW Fresno. Classic rock in new packaging.

The patio is big enough and cool but it’s not shaded properly. I don’t understand, in Fresno, if you have the budget to build a patio but don’t shade it properly, it makes zero sense. There were two people on the patio, huddled against the wall trying to bleed any full shade they could from the building and the only reason they were out there at all was the fact that they had a dog with them. So, hey, I guess they allow dogs on the patio if you were wondering.

Shade your patios properly, Fresno. In case you have not noticed, the sun is a bastard around here.

So the food seems to be the same as the Campus Point location, along with the beer. Since this location also has brewing equipment, I hope that each location will have its own beer. Meaning, one you can only get at THAT location. That would be cool for us beer geeks.

If you’re wondering what the best beer they make is, I say it’s the Citra. And The NW Fresno location’s is very solid, so far. The almond brown and the “Dog Daze” are too bad either. Hope the guest taps start getting more interesting.

Only Russian River approved businesses and distributors (thank you Delta Pacific Beverage for being worthy) are allowed to carry Russian River beer. The major requirement being that the beer must always be refrigerated and cared for properly.

Here is where to find it in the Fresno area:

We were the last major region in California to get it, but that is okay. It’s here now. The past is past, we are now a Russian River town and it is incredibly awesome.

If you’re wondering, “What the hell is the big damn deal about this “Pliny” guy and why is Russian River beer such a thing?” that is okay. You’re not a beer geek. Cool.

Santa Rosa’s Russian River Brewing is probably the greatest Beer Geek brewery of all time. Their IPA, Pliny The Elder, ushered in a whole style of beer called “West Coast IPA”. I consider the beer the Godfather of the modern IPA.

For a while there (if it isn’t still) Pliny was the number one most traded beer in the beer geek world. If a beer is heavily traded (shipped illegally to regions where a person can’t get the beer), that means it’s highly sought after – aka damn good.

So rejoice, beer lovers, Fresno is now cool. Still waiting on somebody to open up that remote taproom though. 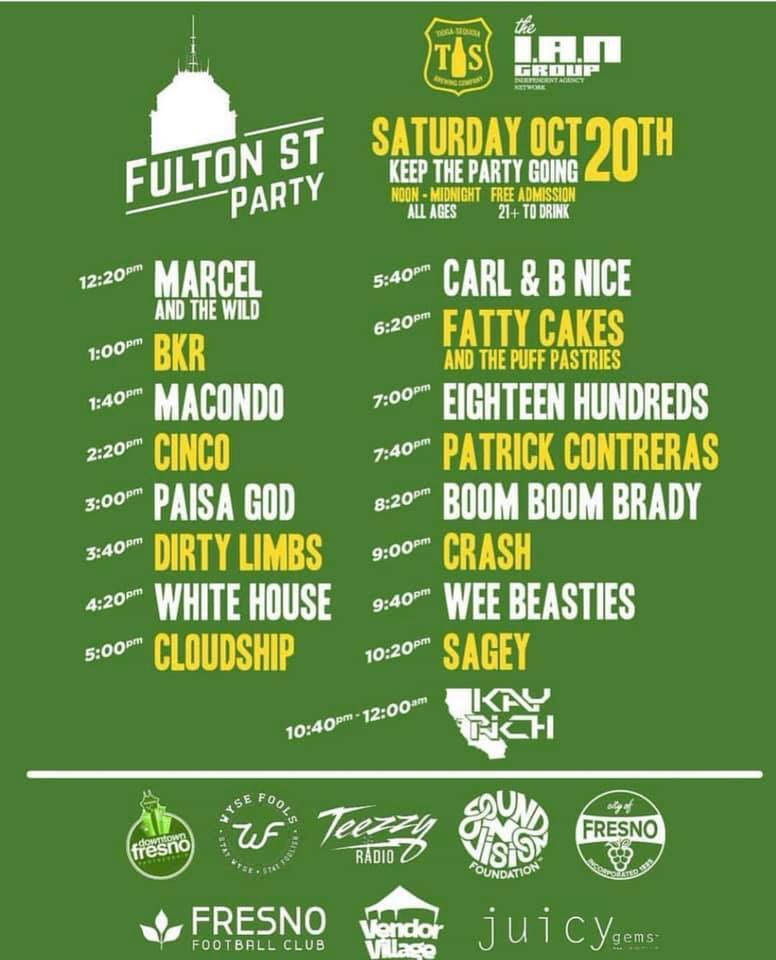