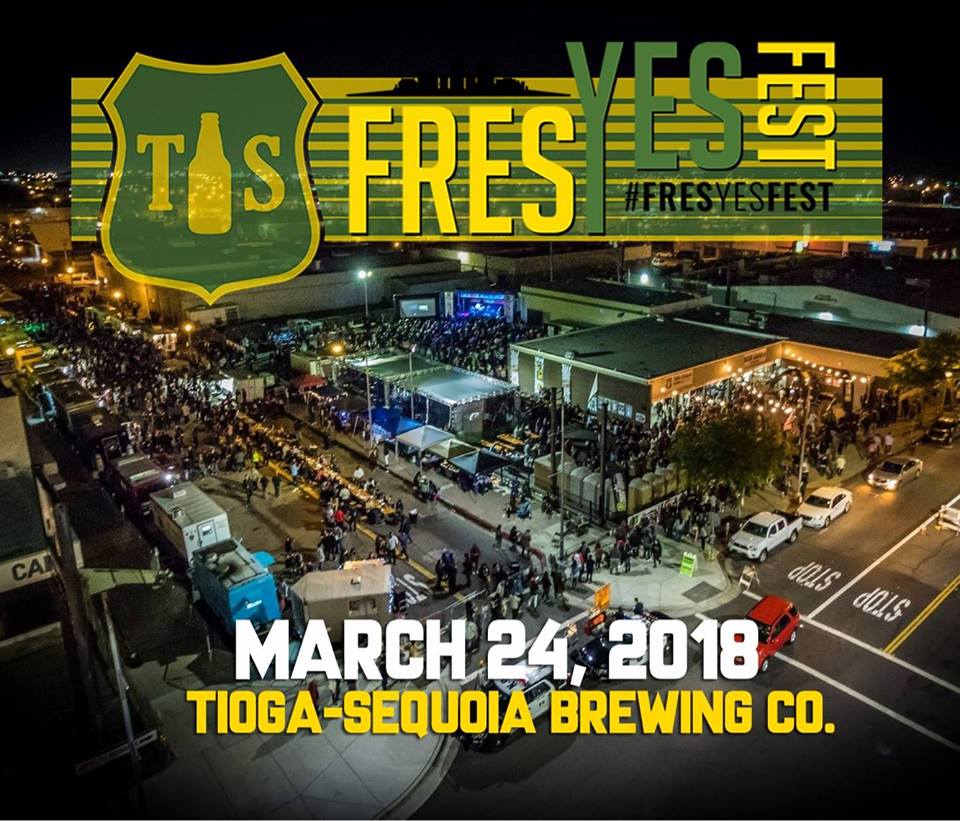 The only problem with the event in the past is that it’s too awesome and successful. Fresno loves things to be free and bumping.

Organizers listened to whiny bloggers and doubled the size this year. There will be more room for activities!! 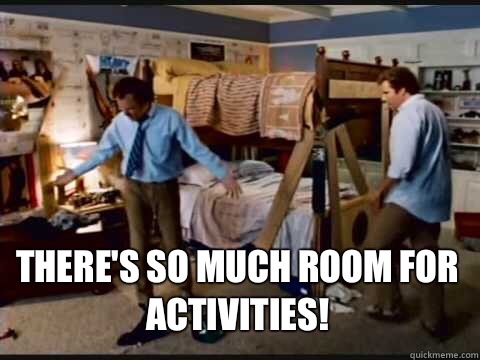 Alright. So, it’s cool, we’re going. But what time?

I base the time I go on two factors:

Getting there at the beginning is the key to avoiding people. And there are two bands I definitely want to see: Sparklejet and Sharks Of Dance.

Unfortunately they play at totally different times. Here are the set times: 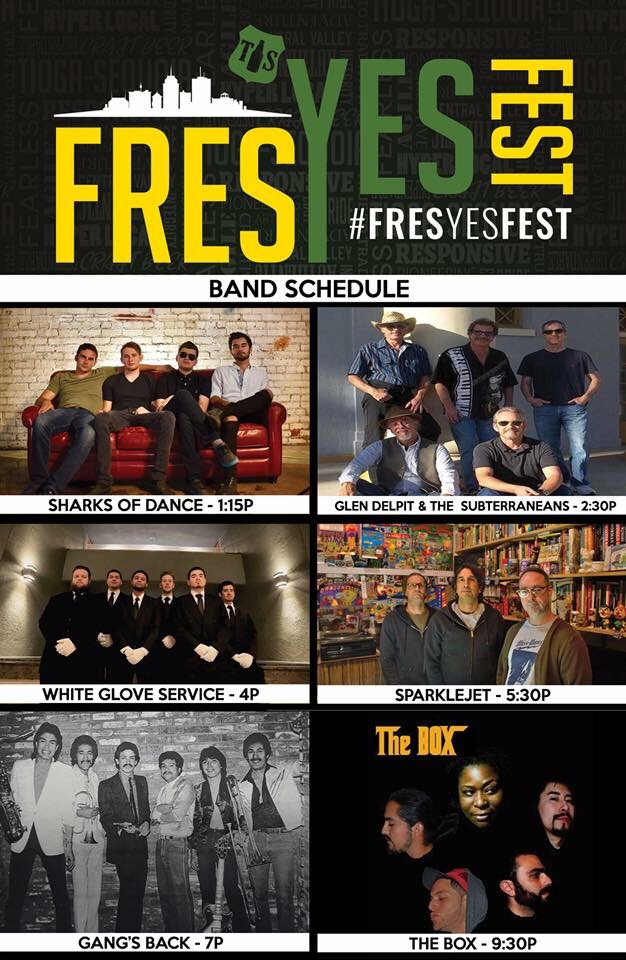 Sharks at 1:15 is excellent! Take in the set, have a couple beers, do an Irish Exit around 2:30 and go about the rest of my day in Fresno.

But wait. Sparklejet does not play until 5:30. That is a long time between shows. Too long when there is beer around. I can’t commit a whole fucking day to one place, I’m not 22.

Not sure how to go about this. I guess I could leave and come back at 5:30 but that is unlikely. Once I return to my NW Fresno life, motivating to go back Downtown will be tough.

I dunno. Guess I’ll figure it out the day of. In the meantime.

Here are the seven things!

In addition to the Sparklejet set at 5:30 and/or maybe the Sharks Of Dance set, here is some other stuff I plan to do:

So, no matter what time I figure out, I’ll be there. I’m sure you and half of Fresno will be too. Maybe we can buy each other a beer.

*Great info that answers every question you might have about this year’s event can be found here. 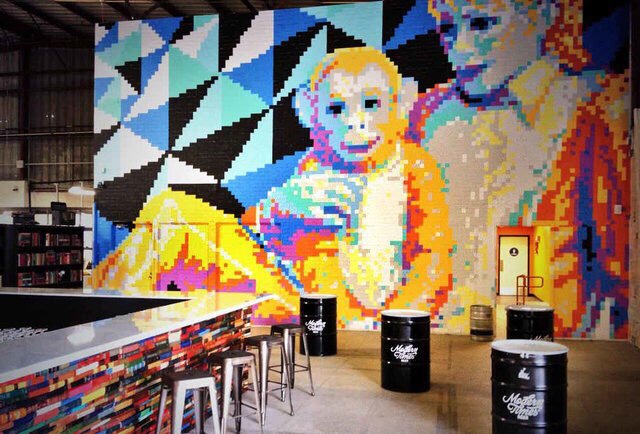 There is no point to continue convincing Fieldwork Brewing to open a  taproom in Fresno. They used up their last available state allowed  5th tasting room spot on some boring Nor Cal place. So I have to move on.

But I am not stopping!

I will always lobby for some cool California brewer to open up a remote taproom so that we can add to our craft beer options, thus helping Fresno overflow its glass of radness.

So, let’s find a new one to convince to come here. A new California brewery to annoy until they open up in Fresno. That pick?:

Why? They have excellent beer. Super cool marketing. Admirable philosophy towards beer culture and being independent. Plus, they have amazingly cool taprooms.

California allows breweries to have five taprooms. Modern Times has three in California, one in Portland (doesn’t count) and one being built in Escondido. So there is a spot left. I want that spot to be Fresno’s.

It’s like an Arthop night but all the time.

The taprooms are works of art. Not all the same, each reflects the personality of the town they are in. A Fresno one would be so fucking rad. It would be a place to brag about.

Look at the main one in Point Loma, nicknamed “Lomaland Fermentorium”, complete with the (pictured above) Michael Jackson & Bubbles mural made entirely of post-it notes:

Full Circle has its charms and good beer. Tioga is getting cooler as they are expanding. HOP PK is new and awesome and going down well with Fresnans. Pine & Palm just moved to a bigger cooler location. Tactical Ops is doing their thing near the airport. Zack’s Brewing and 411 Ales are opening later this year (knock on wood).

So brewing and taproom things are happening. It’s great. But we deserve more. Hell, Visalia has a Barrelhouse remote taproom. Fresno has none. We need one before Bakersfield, Merced and Madera all have one and we don’t.

Someday I want to see this on Modern Time’s Instagram feed: 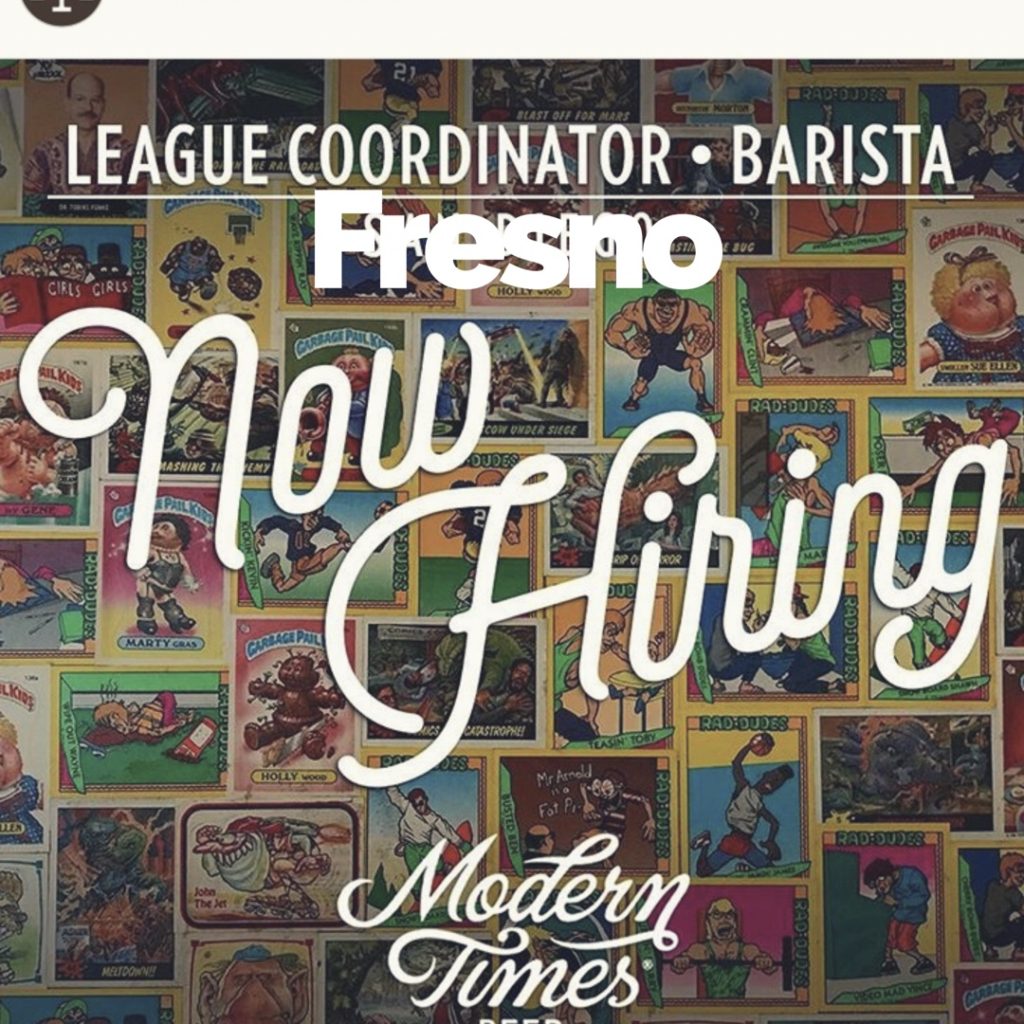 You see that? They also serve excellent coffee. Fresno appreciates its coffee, we know this.

A remote taproom by Modern Times in Fresno would be epic. We can have things. Dammit, Fresno deserves things. We like-a the beer. It all fits.